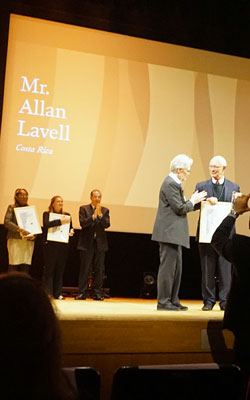 During a ceremony at the 3rd World Conference on Disaster Risk Reduction in Sendai, Japan held on 17th March 2015, Allan Lavell, DAHLIA’s Chair, was announced as winner of the prestigious United Nations Sasakawa Award for Disaster Risk Reduction, which is an outstanding recognition of his work. This prize is awarded to individuals or institutions that have taken active efforts in reducing disaster risk in their communities and advocated for disaster risk reduction.

The Head of the Sasakawa Award Jury, Prof. Dr. Murat Balamir, said: “This personal performance is a perfect example of how grand achievements are possible with individual dedication, despite humble resources and grants. The enduring and most influential individual efforts of Mr. Lavell, in undertaking various roles in a multi-actor environment, make him a leader in the DRM community.” Prof. Murat Balamir, added that Mr. Lavell bore the hallmark of excellence demanded by this year’s award – themed ‘Shaping the Future’ – demonstrating a combination of influence, reach, permanency, innovation, efficiency and collaboration.

Mr. Lavell, born in Britain but based in the Americas for much of his career, is a highly respected researcher and practitioner in disaster risk reduction. His work adopts a multi-disciplinary and holistic approach. He has authored multiple publications and has had papers presented at conferences in 42 different countries. Four decades of teaching, research, consultancies, and contributions had their imprint in shaping DRPR policy and conduct in the Latin American region.

“Personally accessible to all, Mr. Lavell has been capable of tailoring official conduct according to the needs of the local communities, enabling them, and always highlighting the human needs. This has been a ‘glue to hold together disparate communities’. This is a timeless model; a model for all times.”

The Special Representative of the Secretary-General and Head of the UNISDR, Margareta Wahlström said: “In our community, there is a lot going on, all the time. As a reflection of this, the disaster risk reduction community nominated 88 individuals and organizations (from 44 countries) for the Sasakawa Award this year.

Lavell’s integrative approach both at official levels and among civil organizations has encouraged them to collaborate, and coordinate DRPR activities. This is a crosscutting effort between official bodies, academia, research institutions, and local communities that contributed to the formation of new institutions and the provision of new progressive policies, inclusive strategies, all finding their way in laws and regulations.

“His ability to see the big picture has been instrumental in inspiring and mediating decisions, and in developing holistic and sustainable DRPR measures”.