“establish joint humanitarian and development mechanisms to address common challenges” is considered the most relevant recommendation, but the least fulfilled, by partners in Mali. 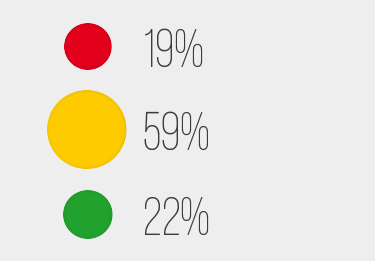 Mixed/Underway with some concerns & action required 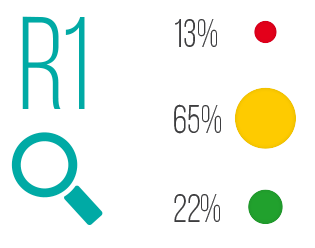 Strengthen accountability to beneﬁciaries through more systematic information-sharing and learning

This recommendation’s level of implementation is moderate, with most (67%) respondents rating it yellow, i.e. ‘Mixed/Underway with some concerns and action required’. Significantly more rated it green (21%) than red (13%). In terms of relevance, the recommendation rated highly (4.3).

The situation in Mali poses particular challenges to the full implementation of this recommendation. Matters of concern include:
– the potential association of humanitarian NGOs with MINUSMA in the eyes of beneficiaries;
– challenges to the preservation, independence and neutrality of humanitarian space;
– limitations in access to the North; and
– MINUSMA’s limited success in guaranteeing the security expected for humanitarian operations.

There is also evidence of limited engagement by the humanitarian community with communication tools and opportunities that could spur progress towards the implementation of Accountability to Affected Populations (AAP), and ultimately the overall score of this recommendation. DAHLIA believes that there lies a long road ahead in this regard. Engaging with beneficiaries, assuring adequate two-way communication, and involving beneficiaries in the various phases of the programme cycle remain pending issues. 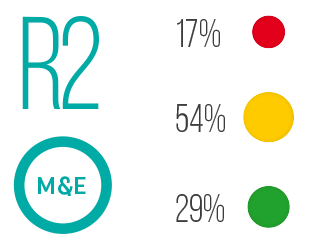 Develop and apply a systematic and institutional M&E system for emergency response, focused more strongly on measuring outcomes and guiding management and decision-making.

Recommendation 2 received the highest proportion of green scoring. Almost one-third of respondents considered it fulfilled, i.e. ‘Implemented/On Track/No action required’, outnumbering those who found its implementation ‘Unsatisfactory/No action/stalled’ (17%). Slightly over half (54%) felt its implementation is underway, with some additional action required. It also ranked second highest in terms of relevance, expressing both its perceived importance and the fact that momentum must be maintained in order to improve its score.

The evaluations referred to all highlight the need to improve information and M&E, as well as the formulation of indicators in logframes so as to make operational progress measurable. A salient aspect for Mali is the use of Third Party Monitoring, a potentially useful tool which nevertheless exhibited limitations in terms of the harmonisation of data collection and reporting methods.

Based on the evidence available, this is an area where action has already been taken. The HT5 suggests that most agencies are conscious of the problem and have sought to address weaknesses. Notably, OCHA’s consolidation since 2012 has largely improved the availability of information. The scores given by respondents seem to reflect this evolution, from an identified problem to one benefitting from the remedial action which followed the recommendations espoused by assessments and evaluations.

“At present, several key-players have engaged in good work that must continue to benefit GBV victims, since needs still persist on the ground.”
– Survey respondent 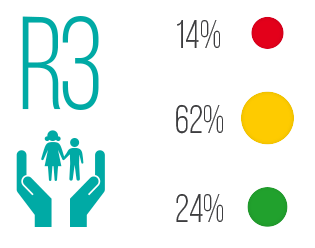 Better integrate gender analysis in the design of emergency and development strategies and at the programme level. Engage with MINUSMA in aspects of child protection and gender concerns.

This recommendation’s score combines a 24% green rating with a negative red rating of 14%. The majority of respondents considered that more must be done to address its implementation, thus opting for a yellow rating. The relevance attributed to it was notably high, scoring 4.1 on a 5 point scale. The government (4) and international NGOs (3.95) were less convinced of its relevance, while all other respondents assigned it over 4 points.

The evaluations consulted regard gender as an aspect yet to be addressed by humanitarian actors in Mali. This holds true both internally (by assuring an internal gender approach, a gender marker and an adequate gender balance in key positions, etc.) and externally (by assuring correct gender targeting and monitoring in operations). Thus far, progress on gender has been most evident in external terms.

Respondents pointed to the pressing need to better address protection and training. Concerns emerge due to the changes of cluster heads and reports of irregular performance in the Protection cluster (UNHCR) and the Child Protection sub-cluster (UNICEF). Moreover, the complex issue of child soldiers, their mobilisation and protection will undoubtedly require further attention.

Future improvements in this recommendation’s rating will invariably depend on the consolidation of steps taken thus far. Specifically, it will require greater awareness of the issue at all levels of concerned organisations, the strengthening of the Protection cluster and Child protection sub-cluster, and the contextual evolution of MINUSMA’s deployment. 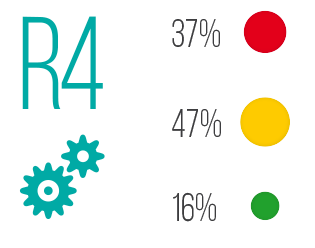 This recommendation’s score reflects its perceived low level of implementation, earning a red rating of ‘Unsatisfactory/No action/stalled’ from 37% of respondents, and a yellow rating of ‘Underway with some concerns and action required’ from 48%. Respondents deemed Recommendation 4 the most relevant of the five proposed, assigning it an average of 4.51 points on a 5 point scale.

Engaging humanitarian and development actors to address common challenges has become critical in Mali. As a well-recognised area of concern, a number of steps have been already taken. As yet, however, these are not considered effective enough. The roll out of the crisis, the IDPs flux, the collapse of institutions, access problems and persistent security constraints have decisively challenged development partners. Meanwhile, the deployment of humanitarian capacity and tools raises issues of harmonisation, communication, common understanding and strategic conflicts which must be addressed.

The deployment of humanitarian capacity and the presence of humanitarians on the ground offers a unique opportunity to advance towards a common agenda which will eventually enable development actors to resume their leading role from a stronger position. Yet, it should be remembered that Mali lies in a crisis-prone zone. Periodic food security shocks, a rapidly growing population which strains available resources, and an ethnic and political divide between North and South, all sustain potential for crises. A need for humanitarian capacity will therefore continue, even if a move towards development arises. As humanitarian and development actors are likely to coexist for some time, adequate instruments for collaboration, communication and addressing common challenges must be defined and tested. In this regard, various evaluations recommend the establishment of mechanisms for a ‘contiguum’ scenario, rather than a ‘continuum’ process.

Progress on this recommendation requires strong institutional commitment from all actors involved, as well as the establishment of joint mechanisms. 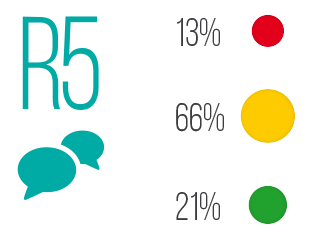 While most respondents (66%) assigned this recommendation’s implementation a yellow rating, i.e. ‘Mixed/Underway with some concerns and action required’, a sizeable proportion of green ratings were also evident (21%). Its relevance was rated 4.04 on a 5 point scale. Although it scored lower than other recommendations, the high rating it attained indicates its clear relevance for stakeholders.

Most lead agencies have recently taken to develop communication strategies and increase capacity. OCHA is trying to harmonise interagency communication and the overarching messages of the humanitarian response. Most efforts, however, are only just beginning.

The lack of a proactive strategy clearly explaining the aims, principles and objectives of Humanitarian Aid may affect the credibility of response efforts. Progress will hinge on how different agencies build their communications strategies and allocate resources and staff to this end.

“Since the end of 2012, enormous progress has been made, including the consolidation of key messages which enable the humanitarian community to speak with one voice, using the same data.”
– Survey respondent