Athens’ 2004 Olympic stadiums are now serving as camps for thousands of refugees and migrants headed from Syria, Iraq, Afghanistan or Africa towards affluent Western Europe. Greece is facing a new phase of its refugee problem following the closing of the Macedonian border. Tens of thousands of refugees and migrants are now stranded in Greece. The Greek government has decided to open up the stadiums on which it lavished 9 billion € for the 2004 Olympics to those fleeing war and poverty.

Twelve years ago the Olympic flame was shining bright against Athens’ sky. Greece was celebrating a millennium of the summer games with euphoric pride, in the land that had invented the Olympics during Antiquity. After the games, the infrastructure built to host them were abandoned, giving way to a panorama of rusting metallic structures, stadiums overrun by weeds and mountains of trash piling up in deserted parking lots. Such dilapidated infrastructure is the sad reflection of a country embroiled in the worst economic crisis of its history. 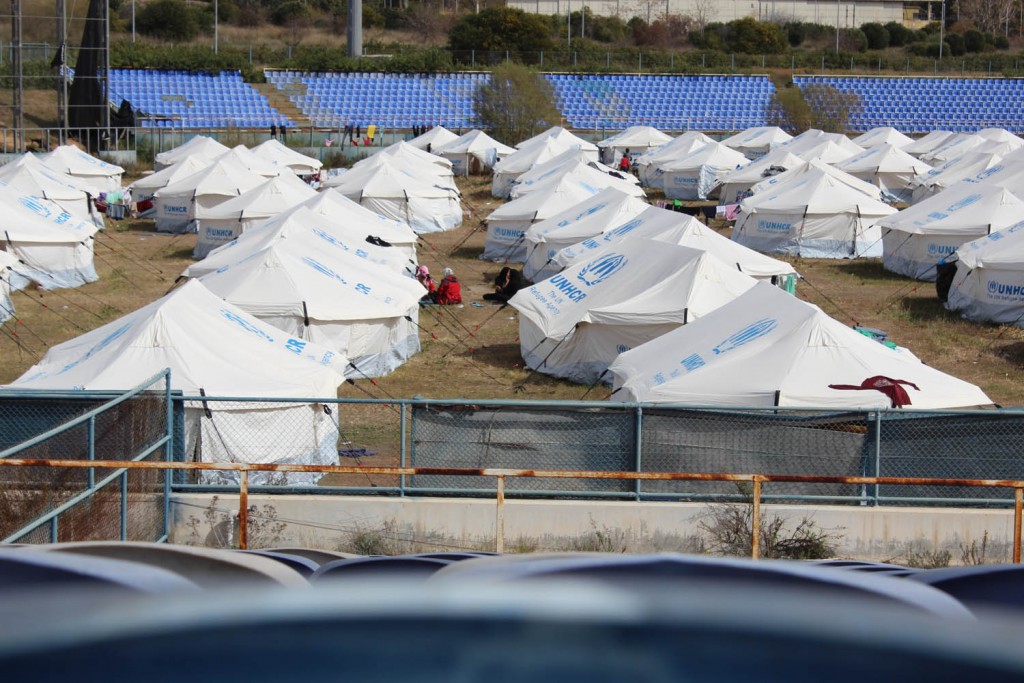 Now thousands of refugees and migrants have been taken from Piraeus port or Victoria Square, in the very centre of Athens, to Galatis indoor Olympic hall – used for table tennis and gymnastics in 2004 – or to Helliniko complex – where baseball and hockey competitions took place. The police strictly control access to these venues. The former grass-hockey stadium is a now dormitory, an open kitchen, a makeshift hospital. It is a playground for refugee and migrant children, both boys and girls, who play football or volleyball right on the site where world-class athletes competed a decade ago. Blankets and clothing hung on the deserted grandstand flutter in the wind as white UNHCR tents line the pitch. A resigned quietness floats in the air. People sit in small groups, checking their smartphones, tracking the news and conversing about their situation. They are sick with worry. T and F from Afghanistan hang around in the camp. “We have come over from so many harsh situations and will not give up with our dream”, they explain. Are they aware that borders are closing? That the EU and Turkey are negotiating a deal? They look sceptical and respond, almost in chorus, “Germany, we will go to Germany. We will find a way.” A lonely man from Pakistan tells the same story, “My family made a huge sacrifice to pay for this trip to Europe. I can’t turn back.” 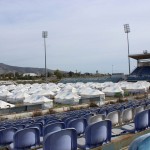 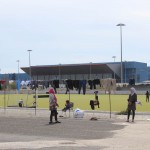 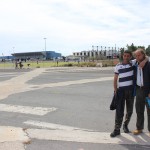 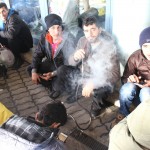 The closure of the Balkan route and the new deal between the EU and Turkey raise concerns that refugees and migrants could fall into the hands of smuggler networks as they turn to alternative routes. These run from Albania to Italy, along the border with Macedonia or, even more dangerously, across the Black Sea towards Ukraine to reach Austria via Slovakia. Desperate moves will be made by desperate people trying to escape the Greek impasse. They are ready to take considerable risks to reach their destinations of choice. Humanitarian actors in the field are trying to inform and warn them of the dangers of turning to smugglers. But they admit that, far too often, refugees and migrants prefer to believe in what they want to hear. They veer between anger and resignation, an ideal cocktail for whoever is ready to offer them a way out in exchange for a few thousand Euros. “It’s just a question of the day”, confesses an African man earlier in the day in a soup kitchen. “We are a group sharing a room but in a few days someone will help us to move from here. We just need to find a little more money.”
Since the beginning of the refugee crisis, smugglers have been making huge profits with no concern whatsoever for safety, security or human dignity. Many refugees and migrants have died or disappeared after arriving in Europe. The situation is particularly alarming for the 10,000 unaccompanied children who have disappeared over the past two years following their arrival in Europe, according to Europol, the EU’s criminal intelligence agency. Many are feared to have fallen into the hands of organised trafficking syndicates.

In Helliniko complex, on the gate that surrounds the abandoned baseball venue, a family has taped a missing person’s notice in Arabic and English featuring a picture of a young girl and a phone number. She disappeared after reaching the island of Lesbos. The Olympiad and refugees now seem a mirror effect of a dream shattered and the lost illusions left behind.

In the light of the current refugee crisis UNHCR, START Network and CDAC identified a gap in the sector on the role of communication with transiting populations and a need for research on how information and communication can support refugees in the Balkans Europe. They asked BBC Media Action and DAHLIA to lead this research which goal is to improve the daily realities for refugees through improved communication responses.

Gilles Gasser is a journalist and independent consultant specialising in humanitarian aid issues and communication.

Aljazeera spoke to Google to find out what Syrians are searching for on the internet.
Read More
The Dutch foundation Bootvluchtelingen providing assistance to refugees arriving by boat to Lesbos. “You are safe now”. On min 1:36 a journalist that has been covering the refugee crisis since May expresses his gratitude.
Read more
Volunteer coordinator at southern Macedonia refugee camp explains how it is like to assist increasing numbers of refugees
Read more