Europe is experiencing the most significant influxes of refugees since World War II. Pushed by civil war, terror or hardship, hundreds of thousands of people have fled the Middle East and Africa. They are risking their lives along the way to Western Europe. Rather than addressing that human drama directly, the EU has, for the most part, sought to avoid taking any responsibility.

Soaked to the bones and stuck in the mud, about four hundred refugees are blocked in a narrow path between Serbia and Croatia, some twelve kilometers from the Serbian city of Sid. The border crossing is confined between desolate cornfields surrounded by an extended trash-littered landscape. It had to urgently be reopened to respond to the irresistible flow of people moving forwards towards one goal: to reach Western Europe, mainly Germany, Austria or Sweden. Exhausted, they clutch backpacks and plastic bags containing their only belongings. As more people gather, the pressure becomes suffocating. Children are pulled off their feet, the elderly struggle to draw breath, someone screams, ‘There is a pregnant woman!’ A policeman stuck on an embankment desperately belts out the order for them to move back to a safer buffer zone. Nobody seems to listen or understand. A green crocodile with large blue eyes and a ginger beard suddenly catches his attention. The reptile that emerged right in the middle of this rippling human wave is in fact an activist, who has come from Austria as a volunteer, to help. He is progressing against the current toward the safe haven signaled by the policeman. “Go with the green crocodile! Follow the crocodile!” exclaims the officer. The tightly packed mass spontaneously follows the activist and moves back slowly. The suffocating pressure weakens and the situation backs to relative normality. 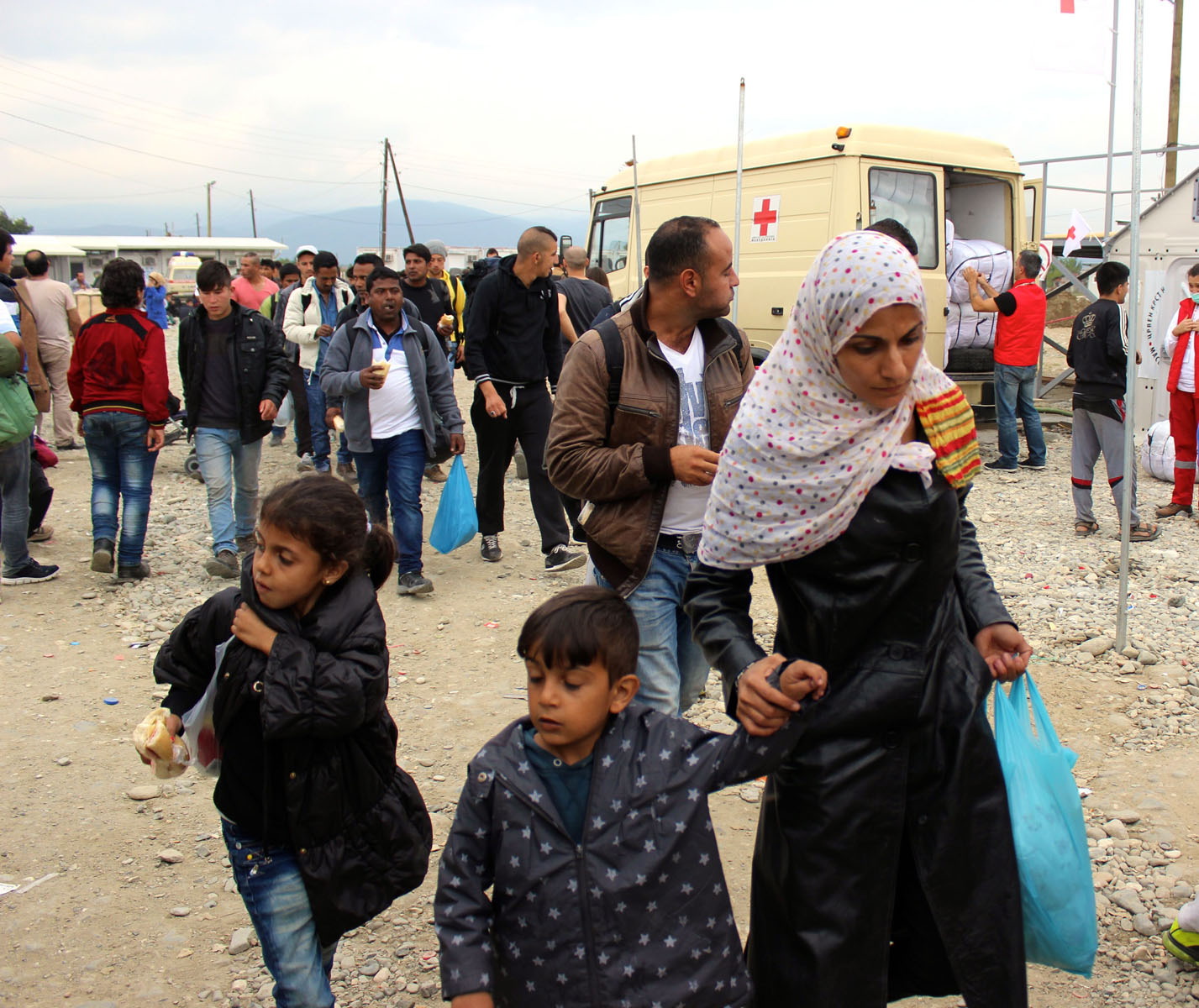 Since the beginning of the refugee crisis, a series of tragedies has been averted thanks to these “green crocodiles”. In Greece, FYROM, and in Serbia UNHCR, the Red Cross, NGOs and volunteers are playing a key role, alleviating human suffering and offering a human face to the response. In Gevgelija, Macedonia, despite improvements in efficiency at the entry point, aid workers remain tense, fearing unpredictable scenarios like new border closings or the sudden influx of refugees. Another concern of humanitarian actors is the sloppy handling of the registration process. Registration is essential to record and update information on people, and protect refugees against refoulement, arbitrary arrest and detention. It is also crucial for identifying persons at risk or with special needs. In Greece, after months of huge numbers of people arriving in Lesvos, the authorities still don’t have an effective system for registering people. In Macedonia and Serbia, the police issue refugees with paperwork that allows them 72 hours to transit through the country without being prosecuted. This absence of efficient registration systems is particularly appalling in the case of minors traveling alone. Many have lost parents in the countries they have left, or lost their families during the journey to Europe. Thousands of unaccompanied minors are at the greatest risk from traffickers, being forced into to domestic work, drug smuggling or prostitution.

Fortunately, unlike previous crises, refugees aren’t making the journey “blind”. Smartphones are widespread, and are empowering refugees to make smarter decisions. They are transforming the way that aid is delivered to them. In this sense, this refugee crisis is probably the first one fully of the digital age, where smartphones and social media are playing a key role. Smartphones are sometimes the only belongings refugees travel with, kept safe and protected in plastic bags and with rubber bands. Their whole life remains in their phones. One of the first services they look for after crossing a new border is to buy a new SIM card. Turkish, Greek, Macedonian or Serbian SIM cards. Communication has no border and technology is a blessing for these refugees. It also a blessing for traffickers who charge up to €18 for cellphone SIM cards worth just €1.30. Refugees make their way to their new lives using GPS coordinates posted on Facebook, Viber, Line or Whatsapp by those who have gone before. Some refugees upload videos to explain to others how and where to cross a border. Smartphones and digital tools are clearly determining the exodus route and deployment. Refugees share basic real-time information on border crossings, best routes, transport or smugglers. Traffickers and smugglers are also capitalizing on new technology by using Facebook groups to advertise their services. Foreign currency-conversion calculators are another popular application. These help people avoid getting ripped off as they cross borders and currency areas. Smartphones create an endless need for electricity and Wi-Fi. When they reach refugee camps, one of their first demands is a power point, a socket to charge their phones and briefly call their families back home. In the Gevgelija transit camp, dozen of phone batteries are taped to a socket wall with black and white wires flowing in every direction. Humanitarian actors should analyze and “socialize” with refugees and migrant networks, feeding them with information.

Access to timely, adequate and reliable information is imperative for these refugees and migrants. In transit camps, refugees are anxious to understand where they are and how to move fast, before any new border closing or crackdown on those crossing it. Humanitarian actors also need more means to recruit interpreters who are sorely missing. The deficit of reliable and independent information is propitious to the spread of rumors. Misinformation on poisoned water, mines on the Croatian border, or buses abandoning people in the countryside are just boosting panic in a population already extremely tired and nervous. A rumor on border closing or building of new fences could suddenly jam the route and fill nearby fields and forests with thousands of people with virtually no supplies and nowhere to go.
A lot must still be done to improve information management and cross-border information sharing. While using transportation in trains or buses, information should be spread using leaflets, posters or pre-recorded broadcasted by speakers. With winter forthcoming, it is also urgent to deploy mobile teams with interpreters and equipped with Wi-Fi. This is needed to inform the refugees, but also to monitor, assess and respond to their needs. They are particularly needed on the borders between Turkey, Bulgaria and Serbia, where small numbers of refugees are transiting in very harsh and isolated areas.

It is in this region that an Afghan man was recently shot dead by Bulgarian border guards. This is the first fatal border shooting in the European Union since the beginning of the current refugee crisis. This shocking incident, combined with the increased use of alternative routes in the central Mediterranean and the Balkans, underlines that whatever “repressive” measures the EU implements, refugees and migrants will continue to come to the region and take tremendous risks to reach safer soil. Almost nothing can stop people facing war, insecurity, violence or extreme poverty. The current status quo is leading to avoidable human suffering and the further development of an extremely profitable market for smugglers. Europol, the European police agency estimates that 30,000 organized smugglers are profiting from the lack of regular migration channels. They display a system that disregards any dignity and facilitates crossings through precarious routes in exchange of thousands of Euros. In August, at the peak of crossings to Greece from Turkey, their daily revenues could total €4.4 million per day. Bad weather will inevitably make it harder to launch boats, the number of trips will probably fall and, as the stormy weather worsens, more of the refugees may drown.

Now European leaders are desperate to force Turkey to secure Europe’s external border and temper new arrivals. In return for the migration “action plan”, the EU will fast track visa liberalization to Turkish citizens and pledge to “re-energize” Turkey’s EU-membership talks. Part of the agreement foresees that Turkey will receive €3 billion to address the refugee crisis. This EU contribution makes sense since Turkey has welcomed more than 2 million Syrian refugees since the crisis began. These funds should be devoted to improve refugees’ living conditions and perspectives, making it a priority to target the most vulnerable among them. Unfortunately, this deal ignores the Turkish authorities’ disrespect of refugees’ rights. Amnesty International has investigated several cases of refugees trying to reach Europe who have been returned by force to Syria by Turkish border police. Others have been abusively imprisoned without access to lawyers. The EU deal with Ankara that aims to block the flow of refugees ignores the multiple challenges they face there. It also neglects the EU’s responsibility to offer protection to a greater number of refugees.

It is time for the EU to appeal to its core principles and to design a coordinated human rights-based humanitarian strategy. The first step will be to develop safe and legal routes to allow refugees to reach Europe. This initiative will permit the development of safe migration channels, reduce the market for smugglers, and organize resettlement. A new asylum and immigration regime should also be promoted to allow successful asylum claimants to be shared across the EU on a mandatory basis. This refugee crisis is a complex issue that touches European citizens’ nerves on immigration, economic security and national identity. Anti-immigration parties, spreading misinformation and fear, are politically hijacking these burning issues. The key word is “misinformation”. This crisis requires the EU to respond in an informed and sophisticated way, communicating to its citizens the principles of solidarity, responsibility and full respect for its values and international obligations as guiding its response and mobilization to welcome refugees. Unless the EU puts principles and action before politics, refugees’ safe journeys will far too often rely on the unlikely chance of bumping into a green crocodile.

Gilles Gasser is a journalist and independent consultant specialising in humanitarian aid issues and communication.

Aljazeera spoke to Google to find out what Syrians are searching for on the internet.
Read More
The Dutch foundation Bootvluchtelingen providing assistance to refugees arriving by boat to Lesbos. “You are safe now”. On min 1:36 a journalist that has been covering the refugee crisis since May expresses his gratitude.
Read more
Volunteer coordinator at southern Macedonia refugee camp explains how it is like to assist increasing numbers of refugees
Read more